Finally got all the little casts painted and glued. But before I can start weathering I want to add a bit of graphics to the body. Specifically, I want to have the words "Knowledge" and "Power" on the top of the hull, as this is a Blood Raven vehicle after all.

But instead of just putting those words on there I had to go and make it extra hard on myself by creating ambigrams out of the words. You know, so you can read them right side up as well as upside down. Just because. I guess the idea is to convey the mystical and meaningful appeal that the phrase "Knowledge is Power / Power is Knowledge" has to the Blood Ravens.

There are apparently some online generators out there that'll automagically create an ambigram out of any word you give them, but the results are typically lackluster. If anything they give you a starting point to evolve and refine your own version from. So I've been drawing and redrawing these two words over and over to give the letters the right shapes to make them read correctly both ways.

I've added one iteration to the Landy already: 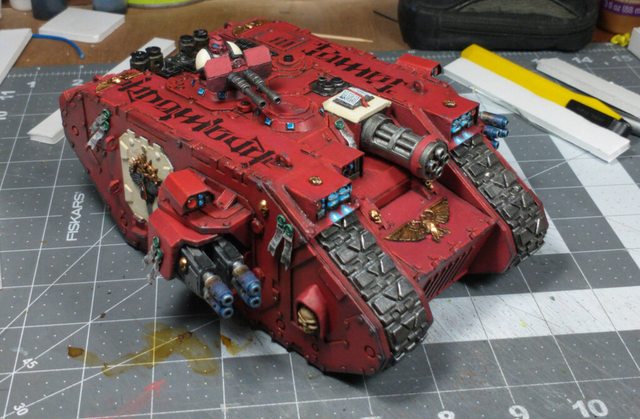 but to my mind it looks a little off. Power is ok, but the Knowledge version just looks bad and hard to make out. So I kept working at it and I think I have a better version now.